Fridays are cool, aren’t they? At first we think: „The weekend is coming closer! Finally! Only two more hours at work, then I can go home and spend my free time with family and friends.” But wait a moment! There was another reason looking forward to it, wasn’t there? If you love music, you’ll know what I talk about: Fridays are also record release days! It’s like Christmas, when you open your present with anticipation and shining eyes. Your heart is beating faster when you put the needle softly on the record. You listen to the new songs and absorb them like a sponge. The record is your new companion: you hear it in the car; before you go to bed; while you’re taking a walk or in the kitchen- everywhere!

You discover new details, when you read the lyrics. There are favorite lines, which creep in your head and stay there: “But you left me here with just a memory.” Or “I play the memory in my head like a symphony.”

Yes, I’m talking about “Devour”, the second record of Dave Hause. As I don’t like normal reviews,  I asked people, if they want to write some sentences about their favorite songs of “Devour”. Christina, Harry, Laura, Susan, Sandra, Steffi, Gisbert, Verena & Northcote- thank you from the bottom of my heart for your words! These little music blog would be nothing without you!

I already fell in love with Damascus last summer, when Dave was touring with The Bouncing Souls. This song catches your attention immediately from the start, fills the air with energie and intense emotions, it just creates a great atmosphere. No matter if Damascus is played solo, acoustic or full band, it always works perfectly as an opener for concerts and the album as well.

Christina (Lady is strong) about The Great Depression:

„The lifeboats looking pretty full, if you find some room reach out and give me a pull. The way we learned to live is fading fast, I guess we never bargained for a crash.“

Dave Hause is a word smith, on and off the stage. One of the quickest wits I know. In this song he has captured the spirit of an entire generation. His usage of imagery and specific traditional american values put this listener in a place of belonging. I hear a  relatedness in this song lyrically, and musically this entire album just sings, i don’t hear a lot of individual riffs or gimmick hooks, what I hear is accompaniment, an aroma to the flavor. Beautiful tones and just enough sparkle to stand up to Dave’s take no prisoners authentic critique of what it is to be at this end of „the American dream“. Many songwriters strive for that gut punch power where you hear a lyric and instantly you know you are a part of something bigger. Dave accomplishes this time and time again on Devour.

First I notice about songs is always the design of the melodies, the instrumentation and the characteristic of voice. I particularly like the rising structure at „Before“. It starts quite slowly and quietly with a slight sound of guitar. The first peak is achieved at the second repetition of “But you left me here with just a memory”. Followed by emotional ups and downs and by and by you catch yourself getting sad and angry at the same time, crying or screaming. In between, there is nothing else. „Before“ expresses desperation, but above all passion, in a wonderfully dramatic way and ends with the faith that there is always a place somewhere which needs to be look for, that gives you hope (even if only for a brief moment) before it’s all over, before you give up.

Devour is an album full of killers. And I do say consciously not… without any fillers. I’ve listened to the CD now a couple of times. But there was one song, that got me already after the first listening. „Father’s Son“ – a simple song about the difficulties how to establish a relationship and how to keep it going. But what makes this song special to me are not the lyrics but the music itself. Starting by the nostalgic sound of the Hammond organ, followed by this stubborn drumbeat (good work Bo Koster and David Hidalgo!)…ramm ta ta, ramm ta ta…. You can’t do other then tapping your foot to the music and shaking the head to the rhythm. Dave’s manic vocals fit perfectly to the music. And finally the word that explains everthing, appears in the lyrics: „Jungle“… that’s exactly how the jungle sounds like. At least in my imagination. Why do I have to think of Creedence Clearwater Revival right now? “ .. So don’t get me wrong, I love your songs and the time we had was fun. But you are your father’s son“ No matter whose father’s son you are, Dave… as long as I love your songs and as long as we have a good time together… the world can’t be that bad.

It is one of my favourite songs from „Devour“ and the one i am most looking forward to hear live in a few weeks. It has a powerful and uplifting vibe, but kind of twisted, conflicted and torn apart lyrics. I am really hoping, that Dave will shed some light on this song and what he was thinking of when writing it, because I have thought of many different interpretations so far and still didn‘t come to a final conclusion. It is pretty obvious to me, that the person this song is about is stuck in a situation and doesn’t know how to escape it. I havent decided on what kind of situation it is yet, in my recent interpretation, he or she is emotionally bound to another person and

trying to escape that relationship, dreaming of a new start and a better future for him/herself. At first i thought it is written from a „submissive“ point of view, but it might actually be the other way around and the storyteller is the dominant person (or growing up to be?). Is it maybe even written from two points of view? One person trying to leave and the other one begging him or her not to? I know this though: the title „Stockholm Syndrome“ fits the song perfectly, cause it gives the lyrics an even more powerful meaning! (Being stuck in a situation and afraid of change, not being able to leave, being dependant on somebody who might not be good for themself and so on). One of my favourite lines from this brilliant song that in my opinion sums it up quite nicely is: „Am I safer to dance with the devil I know?“

„Lost faith but I’m trying to believe“ is one of my favourite lines from this song! What makes it so special to me is it’s simplicity, yet powerfulness. Becoming Secular basically only consists of a very nice guitar play and vocals, but (as always) Hause doesn’t disappoint his fans. The lyrics are beautiful and the unobtrusive sound make this song so special to me!

Sandra about The Shine:

„The Shine“ was one of the new songs we got to hear on Dave’s last tour. The first time I listened to it, I connected to the lyrics right away. I think everyone who loves music locks him/herself into the „tower of song“ sometimes. I certainly have found the shine in some of my darkest moments, thanks to music. (also, thumbs up for the Leonard Cohen reference) I have to say, I especially enjoy the live version of this song. It’s such a great moment in every Hause gig, when he splits the crowd in two and everyone gets to sing along.

Bricks is one of the more quiet songs on „Devour“, but in my opinion, coincidently one of the most intense. The guitar play reminds me of Simon & Garfunkel songs, sad and gentle at the same time. Dave‘s voice seems to toss and turn between surrendering, bearing and regaining new strength. On the one hand there‘s the line „I‘m up later each night trying to write my way out of this tomb“ which suggests that there‘s no real way out of his situation within sight and then he gets to „I‘ll build a brand new foundation from the bricks you threw my way“. That, for me, is the outstanding line in the song and the conclusion. So, once again, Dave accomplishes to wallow in sadness and to give hope, all within 3:44 minutes. I really do love this song and hope it makes it‘s way onto the setlist.

I heard Dave’s music for the first time when I watched a concert of the The Revival Tour on TV. He played songs like „Pray For Tuscon“ and „C’mon kid“ and I loved the 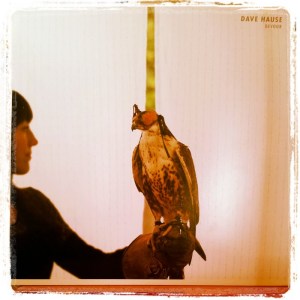 way he combined those melancholic melodies with words of cheer and positive messages. I know, one shouldn’t think stereotyped but if the singer of a punkrock band plays his songs on an acoustic guitar it’s not far to seek to compare him with the likes of Chuck Ragan or Frank Turner. When I listened to the new album for the first time I thought more of punkrock-influenced Springsteen-rock-bands like The Gaslight Anthem or Arliss Nancy than of a singer-songwriter record, especially the last song of the album, „Benediction“, reminded me of The Gaslight Anthem’s „Mae“ somehow. But no matter if one listens to the stripped Revival-Tour-Dave or the grand fullband arrangements on „Devour“, the unique trademarks stay the same: Dave begins his „benediction“ with some questions like „Are you (…) aware that your sick saddened heart is the cross that you bear?“ and „Did the promise they broke come and rip you apart?“ and states: „We’re damned from the start.“ But he doesn’t leave us behind in this depressed mood, instead, the song increases constantly until Dave finally concludes: „It’s love my friend in the end that can save us tonight. So are you in?“ Yes, I’m in.

Northcote about Devour: I first listened to the album on the wall street journal stream a week before its release. I listened to it at night. Dave’s new songs seem to be about a profound loss of innocence, however the sound of the album is strong, energy filled and the writing is resilient. The album makes you clench your fist. The track that stuck out to me during the first listen was ‚Same disease‘. I came back to that song and listened to it 4 or 5 times. I just picked up the digital album this morning. I’m excited to take a walk to downtown today and spin through it again.

*By the way: You can win tickets for the tour on Lieblingstape: Click!

This site uses Akismet to reduce spam. Learn how your comment data is processed.